"When you come to the Ammonites, do not harass them or provoke them to war, for I will not give you possession of any land belonging to the Ammonites. I have given it as a possession to the descendants of Lot.(That too was considered a land of the Rephaites, who used to live there; but the Ammonites called them Zamzummites. They were a people strong and numerous, and as tall as the Anakites.  The Lord destroyed them from before the Ammonites, who drove them out and settled in their place.)
(The Lord had done the same for the descendants of Esau, who lived in Seir, when he destroyed the Horites from before them. They drove them out and have lived in their place to this day.)
(And as for the Avvites who lived in villages as far as Gaza, the Caphtorites coming out from Caphtor destroyed them and settled in their place.)"

Moses Moves Up the East Side of the Jordan (Trans-Jordan) 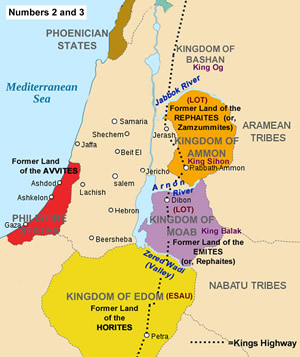 Moses led Israel up the Kings' Highway on the east side of Edom and stopped at the Zered Valley at the base of the Dead Sea. This is where the Moabites saw Israel approaching and their King Balak sent for Balaam. Israel was going to pass by Moab peacefully also since they were descendants of Lot. But, when Israel was enticed to sin with the Moabite woman and join in the worship of the Baal of Peor, the Lord commanded Moses to treat the Moabites as enemies in Numbers 25:16-18:
"The Lord said to Moses, 'Treat the Midianites as enemies and kill them. They treated you as enemies when they deceived you in the Peor incident involving their sister Kozbi, the daughter of a Midianite leader, the woman who was killed when the plague came as a result of that incident.' ” - Numbers 25:16-18

Previously, when the Lord had given the land of Moab to the Moabites, they had to drive out the Emites (which were also called Rephaites) according to Deuteronomy 2:10-11. The word Rephaites means "shades" and "ghosts," but the Ammonites preferred to call them Emim which means "frightful ones."
In Deuteronomy 2:13 the Lord told Moses to cross the Zered Valley and Israel approached the land of Ammon as they continued up the Kings' Highway to the Arnon River, or the Arnon Gourge. On the other side of the Arnon Gourge lay the territory of the Amorites and their King Sihon between the Jordan River and the land of the Ammonites. In Deuteronomy 2:19 Moses is told not to harass the Ammonites because they are the descendents of Lot and had also been given their land by the Lord. The Ammonites had also had to drive out the Rephaittes ("shades," "ghosts"), but they called them Zamzummites. The name Zammabu is a personal name found in a Babylonian list of kings. The Greek Septuagint translates "Zamzummites" as "mighty ones."
But, the Lord tells Moses that when Israel enters the land of the Amorites (which is between Ammon and the Jordan River) and their King Sihon, they are to "engage him in battle."
“Set out now and cross the Arnon Gorge. See, I have given into your hand Sihon the Amorite, king of Heshbon, and his country. Begin to take possession of it and engage him in battle. This very day I will begin to put the terror and fear of you on all the nations under heaven. They will hear reports of you and will tremble and be in anguish because of you.” - Deuteronomy 2:24-25

One additional note, the land of Philistia was at one time occupied by the Avvites, but were driven out by a people coming from Caphtor, which is the Greek island of Crete. This was the early stages of the arrival of the people who would become the Philistines. It is worth mentioning that several of the cultural practices of the Philistines reflect an ancient Greek culture.

Chatser (Hb) – Court (Eng) – chatser is the Hebrew word that means “court,” “enclosure,” “settlement.” In Leviticus 25:31 chatser is a settlement without a wall to protect. Chatser refers to a new quarter of the city that grew outside the wall of Jerusalem in 2 Kings 22:14.

Do I realize God has designed, created, called and equipped me for a purpose? I will be most successful and content when I seek these things. I will fulfill God’s plan for me when I pursue what God has prepared for me.

Details of the archaeological excavations at Masada.

"The power of truth is so great that it defends itself by its own clarity." - Lactantius, 304 AD

The Guntenberg Bible was the first Bible printed with a printing press with moveable type. The very first copy took three years of constant printing to complete. It was finished in 1455 with 1,284 total pages.
You can purchase one of the original pages (or, a leaf) of this 1455 Bible now for $95,000-195,000 here

Many coins of Herod Agrippa I who ruled from 37-44 AD have been found. Agrippa I was the one who executed James in Acts 12:1-2, arrested Peter in Acts 12:3, but then was struck down by God and was eaten by worms according to Josephus and as recorded by Luke in Acts 12:19-23. This coin shows Agrippa in 38 AD and as a rider of a horse. (Images. Details here and here.)

"Cast but a glance at riches, and they are gone, for they will surely sprout wings and fly off to the sky like an eagle."
- Proverbs 23:5