"By the rivers of Babylon we sat and wept when we remembered Zion. There on the poplars we hung our harps, for there our captors asked us for songs, our tormentors demanded songs of joy;

they said, 'Sing us one of the songs of Zion!'

How can we sing the songs of the Lord while in a foreign land? If I forget you, Jerusalem, may my right hand forget its skill. May my tongue cling to the roof of my mouth if I do not remember you, if I do not consider Jerusalem my highest joy.

Remember, Lord, what the Edomites did on the day Jerusalem fell. 'Tear it down,' they cried, 'tear it down to its foundations!'

Psalm 137 records the experience and confessions of the temple musicians during their first years in Babylon after their deportation in 586 BC. This Levitical order of musicians were likely among those who had ignored Jeremiah’s teaching and watched him as he was publicly mocked in stocks on the temple mount (Jeremiah 20:1-6), possibly while they had performed in the background. Now, Jeremiah’s words had been fulfilled and his warnings had proven just.

The Hebew noun neharot in Psalm 137:1 translated “rivers” or “streams” is a reference to the many canals cut through and around the beautiful city of Babylon connecting the Tigris and Euphrates for protection, travel and resources.

Nebuchadnezzar’s deportation of the Jews included the plundering of the Temple of precious metal (gold, silver, bronze, etc.), furniture and articles, but also the transportation of the priestly musical instruments into Babylon. Taking the levitical musicians along with their musical instruments captive would be similar to kidnapping your favorite rock and roll band along with their guitars and sound equipment. Then, setting up their stage and demanding they perform an outdoor concert of party and celebration. This is seen in Psalm 137:2, “There among the poplars,” when the Levites express how difficult it is to perform the joyful songs (example: the Psalms of Ascent) while they are in a foreign land and the image of their burning temple and slaughtered bodies of members of their community is still fresh in their memory. (The remains of the Assyrian palace of Sennacherib in Nineveh preserves a similar setting in a relief showing Assyrian captors watching their Jewish prisoners from Lachish carry and play their lyres, or “guitars”, as they are deported into a foreign land in 701 BC.)

In 137:5 the Jewish musicians take an oath and curse their tongue from singing and their right hand, which was used to strum the lyre, from its skill of playing if they sing the joyful songs of Zion for the Babylonians.

Instead these Levitical musicians turn this chance to perform songs of joy formerly sung on the Temple Mount into a song (Psalm 137) with lyrics of angry vengeance and rebellion toward their Babylonian captors and their Edomite neighbors (see book of Obadiah) who cheered the success of the Babylonian destruction. These priestly musicians end this song that is sung for their captors with the lyrics:

“Happy is he who repays you…he who seizes your infants and dashes them against the rocks.”

These lyrics are on the opposite side of the spectrum of musical lyrics. These words swinging from words of joy and celebration to shouts of chaos and rebellion. 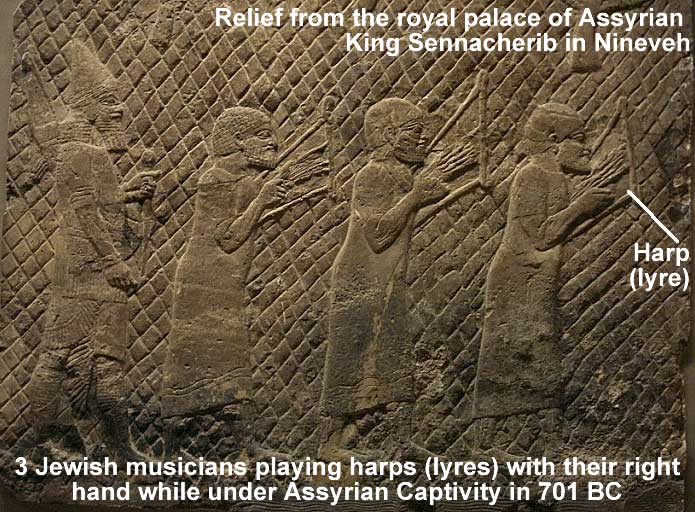 Am I careful to judge a statement against the knowledge of the Word of God before I embrace it as truth?

Remains of a shepherd's tower in the hills of Benjamin

"The Christians build hospitals in which they receive the poor, the sick, and travelers, and in each city they have one, two or even three hospitals. But I never heard that the Saracens (Muslims) have more than two hospitals, one at Tunis and the other at Alexandria."
- Raymond Lull (1235-1315), Spanish mystic and missionary

Ignatius of Loyola (1491-1556), a Spanish soldier and founder of the Jesuit Order, said in 1522:
"To arrive at the truth in all things, we ought always to be ready to believe that what seems to us white is black if the hierarchical Church so defines it."

(Both the OT prophet Isaiah in Isaiah 5:20 and Jesus in Matthew 6:23 warned of this twisted attitude.)

In the book of Acts the author Luke accurately uses the language, words and the official titles popular during the first century when he wrote. The appearance of these words in Luke’s writings gives credibility to the authenticity of his writings since a forgery or an author of a later date writing a pseudo-graph would not have had the ability or knowledge Luke demonstrates. Here are some examples from the book of Acts:

14:11 – Lycaonian is the language spoken at Lystra 16:8 – Troy was properly called Troas 17:6 – Magistrates in Thessalonica are also called “politarchs” on inscriptions 17:18 – “spermologos” was a slang word in Athens that correctly applied to their view of Paul 19:35 – “neokoros” is the correct Roman title of honor 27:28 – taking soundings to measure the depth of water is correctly referred to as “bolisantes” 28:7 – the leader on the Island of Malta is correctly called “protos tes nesou” (“first man of the Island”) and not “chief”, “king”, or some other term that would not have been correct in the contemporary, local language.

"Through patience a ruler can be persuaded, and a gentle tongue can break a bone."
- Proverbs 25:15

Don’t let tomorrow find you unprepared. Meet tomorrow with a plan and with expectations.
2 Samuel 3
New International Version (NIV)
3 The war between the house of Saul and the house of David lasted a long time. David grew stronger and stronger, while the house of Saul grew weaker and weaker.
2 Sons were born to David in Hebron:
His firstborn was Amnon the son of Ahinoam of Jezreel;
3 his second, Kileab the son of Abigail the widow of Nabal of Carmel;
the third, Absalom the son of Maakah daughter of Talmai king of Geshur;