"Those who trust in the Lord are like Mount Zion,
which cannot be shaken but endures forever.
As the mountains surround Jerusalem,
so the Lord surrounds his people
both now and forevermore."

Psalm 125 is part of the “Songs of Ascent” (Ps. 120-134) sung by Jews approaching the Temple Mount to worship in the Temple courts. This psalm seems to have originated while Israel was in Babylon under the imperial power of Babylonia or after Israel’s return to Jerusalem while Persia held power. The ruling foreign national power of Babylon or Persia is referred to as “the scepter the wicked” in 125:3.
The focus of this psalm is on the steadfastness of Mount Zion which is geographically Mount Moriah, the location of the temple mount and the fallen temple. It appears this psalm was written at a time early in the Jewish return from Babylon during the Persian Empire between 537-516 BC when there was no temple standing. Since, there is not a standing temple the psalmist focuses our attention on the enduring nature of Mount Moriah, called Mount Zion here.
The Hebrew verb “yashab” is translated “endure.” “Yashab” means “abide, continue, dwell, establish and endure.” It is often translated “to be settled” as in Joel 3:20 where the NIV text says, “Judah will be inhabited forever and Jerusalem through all generations.” God’s enduring protection of Mount Moriah and the people who worship there is portrayed in the image created by the mountains that encircle it.
God’s presence surrounds his people always and forever just like the mountains around Jerusalem have been established to always surround the temple Mount.
Do realize that even in today’s topography Mount Moriah (the Temple Mount referred to as Mount Zion by the writer of Psalm 125) sets lower than these mounts that surround it:
The image of Mount Moriah, the temple mount, being established and surrounded by higher mounts to the north, the south, the east and the west is an image of God’s people dwelling eternally surrounded by his protection. 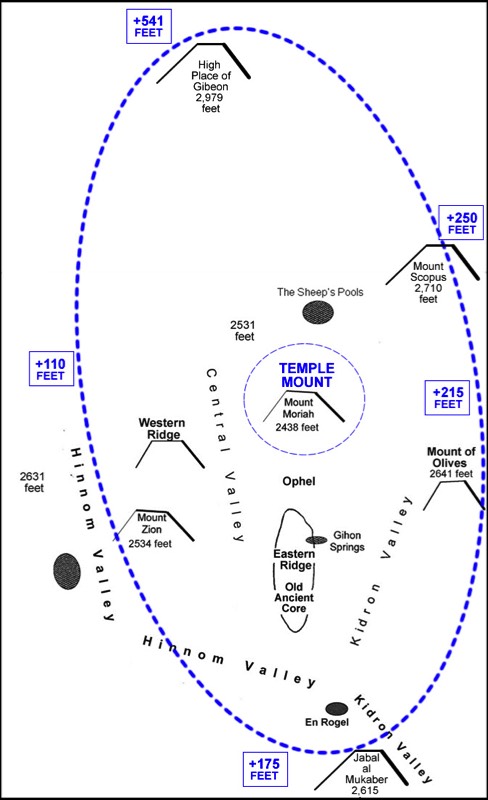 I will trust and be aware of God’s presence in my life.

Be a light in the darkness

Solomon's Quarries under the Old City of Jerusalem. Many of the ashlar stones for the Temple and other buildings throughout Jerusalem's history have been taken from here. (More details 1, 2)

Watch a video of Toni and Galyn's exploration of Solomon's Quarries below:

Details of Ezra chapter 2 on a map.

"What we are lacking today in our productive effort in this country is a Christian approach - a Christian background...A merely materialistic, self-centered outlook on our work cannot give us a high morale...Inducements of a material kind can never replace the spiritual urge which can only come from our sense of devotion to a cause which transcends our own personal interests."
- Sir Stafford Cripps (1889-1952), a British Labour politician on May 11, 1947)

• John, the apostle, arrived from Jerusalem in 66 AD

• Papias, was a bishop in Hierapolis (by Colosse and near Ephesus). Papias’ book "Sayings of the Lord" has been lost but is heavily quoted by early church writers.

• Ignatius was appointed to Antioch

• Polycrates, (130-196), was the 8th bishop of Ephesus. Polycrates knew Polycarp and Irenaeus. Wrote to the Roman bishop Victor concerning Easter and was cut off from the Roman Church until Irenaeus interceded.

The Jehoash Inscription (JI) is a 15 line Hebrew inscription that is said to have been discovered in the Muslim cemetery near the eastern wall of the Temple Mount in Jerusalem. The inscription is a royal declaration (see translation below) describing repairs to the Temple by King Jehoash (or, King Joash of 2 Kings 11-12 who reigned 835-796 BC). The ancient Hebrew text is in agreement with 2 Kings 12:1-16 and 2 Chronicles 24:4-14.
The patina (a thin layer produced by age that forms on the surface of stone) is believed to be from antiquity. According to an article by Hershel Shanks in this month's Biblical Archaeology Review (July/August 2014) the patina of the Jehoash Inscription stone contains gold globules between 1-2 micrometers in diameter. Gold in this form is not available commercially. Ernst Pernicka, a gold specialist from the Eberhard Karls University of Tubingen and professor of archaeometry and archaeometallurgy, explained that gold melts at 1,947 degrees Fahrenheit and boils at 5,378 degrees Fahrenheit. When gold melts it forms into larger droplets. After considering the micrometer gold droplets in the ancient patina Pernicka agrees with the international team of scholars from Israel, Germany and the United States that had previously said, “Our analyses strongly support the authenticity of the Jehoash tablet and its inscription.” This Jehoash Tablet would have been displayed on or near the Temple beginning around 820 BC. This royal inscription would have fallen to the ground and been engulfed in the same intense heat of the flames that consumed the Temple and turned the temple's decorative gold molten in 586 BC when Nebuchadnezzar destroyed Jerusalem.
(Articles 1, 2)
(Translation)
(Images 1, 2)

"He who loves a pure heart and whose speech is gracious will have the king for his friend."
- Proverbs 22:11