"Then I heard him call out in a loud voice, ‘Bring near those who are appointed to execute judgment on the city, each with a weapon in his hand.’

And I saw six men coming from the direction of the upper gate, which faces north, each with a deadly weapon in his hand. With them was a man clothed in linen who had a writing kit at his side. They came in and stood beside the bronze altar.

Now the glory of the God of Israel went up from above the cherubim, where it had been, and moved to the threshold of the temple.

Then the Lord called to the man clothed in linen who had the writing kit at his side and said to him,
‘Go throughout the city of Jerusalem and put a mark on the foreheads of those who grieve and lament over all the detestable things that are done in it.’

As I listened, he said to the others, ‘Follow him through the city and kill, without showing pity or compassion. Slaughter the old men, the young men and women, the mothers and children, but do not touch anyone who has the mark. Begin at my sanctuary.’

So they began with the old men who were in front of the temple."

Angels Mark the Citizens for Protection or Destruction 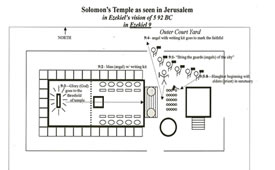 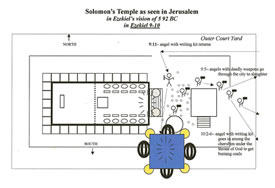 Kausteriazo (Gr) – branded (Eng) – the Greek word kausteriazo means “to burn in with a branding iron.” Kausteriazo is used by Paul when he writes to Timothy:

“Such teachings come through hypocritical liars, whose consciences have been seared as with a hot iron.” – 1 Timothy 4:2

Do I believe the truth? Do I live in obedience to the truth?
I will make decisions and obey God to overcome the disastrous direction of the world.

God's will be done

Diagram detailing Herod the Great's family tree and the Herodian kings who followed him and are mentioned in the New Testament.

“He answered,
‘Sir, I perceive, by the book in my hand, that I am condemned to die, and after that to come to judgment.’

Then said Evangelist,
‘Why not willing to die, since this life is attended with so many evils?’

The man answered,
‘Because, I fear that this burden that is upon my back will sink me lower than the grave, and I shall fall into Tophet (Isaiah 30:33).

Then said Evangelist,
‘If this be thy condition, why standest thou still?’”

– John Bunyan in
“The Pilgrim’s Progress”
(read it here)

A seal with a proto-ionic capital, which represents the royal family of Judah, along with the name “Pedaiah, son of the king” inscribed on it has been found.
(Details. Photo.)
First Chronicles 3:17-19 tells us that King Jehoiachin had a son named Pedaiah who was the father of Zerubbabel. Pedaiah’s son, Zerubbabel, was the man who returned to Jerusalem as the Persian governor “the descendants of Jehoiachin the captive…Pedaiah…The sons of Pedaiah: Zerubbabel and Shimei. The sons of Zerubbabel: Meshullam and Hananiah. Shelomith was their sister…” – 1 Chronicles 3:17-19
(NOTE: a seal of Shelomith has also been found - 1, 2.)