"In the twenty-fifth year of our exile, at the beginning of the year, on the tenth of the month, in the fourteenth year after the fall of the city — on that very day the hand of the Lord was on me and he took me there.

In visions of God he took me to the land of Israel and set me on a very high mountain, on whose south side were some buildings that looked like a city. He took me there, and I saw a man whose appearance was like bronze; he was standing in the gateway with a linen cord and a measuring rod in his hand.

The man said to me, 'Son of man, look carefully and listen closely and pay attention to everything I am going to show you, for that is why you have been brought here. Tell the people of Israel everything you see.'

I saw a wall completely surrounding the temple area. The length of the measuring rod in the man’s hand was six long cubits, each of which was a cubit and a handbreadth. He measured the wall; it was one measuring rod thick and one rod high."

Ezekiel Walks Through the New Temple

When Ezekiel received the message recorded in Ezekiel 40 it had been 13 years since Ezekiel’s last message (Ezekiel 33:21-39:29). Like the previous vision received in 586 BC this new message in April of 573 BC (Ezekiel 40) speaks of a future restoration of Israel. In this vision of 573 BC, 13 years after Jerusalem had fallen, Ezekiel is taken to an unidentified mountain with an unidentified city on its southern slope. It becomes apparent that this mountain is Mount Moriah in a future state with the restored city of Jerusalem setting on its south side.

Meeting Ezekiel at this future site is an angelic figure with a measuring rod 10 feet and 6 inches long. The angel also holds a linen cord which will be used like a tape measure. (A regular cubit was about 18 inches long and a handbreadth was about 3 inches. The “long cubit” that was in use in Ezekiel’s time was 21 inches which was 1 cubit plus 1 handbreadth, or 18 inches + 3 inches.)

Ezekiel is shown a large, magnificent temple that will someday be constructed and then used by the people of Israel when they are ultimately restored to the land of Israel. The angel with the appearance of bronze commands Ezekiel to: 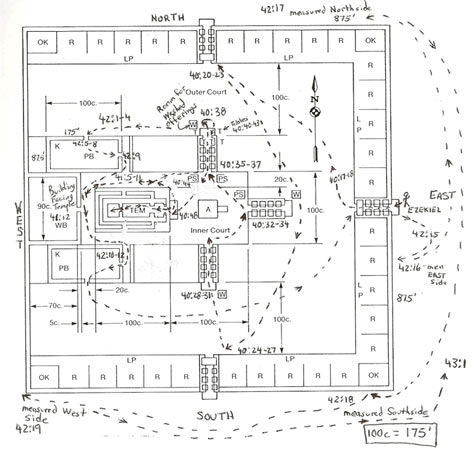 This tour and the recording of these details will continue from chapter 40 up until 42:20. At that point in Ezekiel’s narrative the Glory of God returns to Israel and enters this temple in Ezekiel 43:1-9.

Chadal (Hb) - cease (Eng) - The Hebrew word chadal means “to cease,” “to come to an end,”
“to desist” and “to lack.”
The poor would never chadal to be part of society according to Deuteronomy 15:11.

Concern for those that need help

Cities in central Israel located on a map.

Newborn babies in the ancient Near East were rubbed with salt. This practice is mentioned in Ezekiel 16:4. It was practiced for hygienic purposes with the intention of cleaning and strengthening the baby’s skin. Some scholars say the salt indicated that the child would grow up to be honest. The practice of rubbing the infant with salt is still practiced by those who claim that it makes the baby strong. (more)

"The sluggard buries his hand in the dish; he is too lazy to bring it back to his mouth."
- Proverbs 26:15

2 Kings 10 New International Version (NIV)
Ahab’s Family Killed
10 Now there were in Samaria seventy sons of the house of Ahab. So Jehu wrote letters and sent them to Samaria: to the officials of Jezreel, to the elders and to the guardians of Ahab’s children. He said, 2 “You have your master’s sons with you and you have chariots and horses, a fortified city and weapons. Now as soon as this letter reaches you, 3 choose the best and most worthy of your master’s sons and set him on his father’s throne. Then fight for your master’s house.”
4 But they were terrified and said, “If two kings could not resist him, how can we?”
5 So the palace administrator, the city governor, the elders and the guardians sent this message to Jehu: “We are your servants and we will do anything you say. We will not appoint anyone as king; you do whatever you think best.”
6 Then Jehu wrote them a second letter, saying, “If you are on my side and will obey me, take the heads of your master’s sons and come to me in Jezreel by this time tomorrow.”
Now the royal princes, seventy of them, were with the leading men of the city, who were rearing them.
7 When the letter arrived, these men took the princes and slaughtered all seventy of them. They put their heads in baskets and sent them to Jehu in Jezreel. 8 When the messenger arrived, he told Jehu, “They have brought the heads of the princes.”
Then Jehu ordered, “Put them in two piles at the entrance of the city gate until morning.”

9 The next morning Jehu went out. He stood before all the people and said, “You are innocent. It was I who conspired against my master and killed him, but who killed all these? 10 Know, then, that not a word the Lord has spoken against the house of Ahab will fail. The Lord has done what he announced through his servant Elijah.” 11 So Jehu killed everyone in Jezreel who remained of the house of Ahab, as well as all his chief men, his close friends and his priests, leaving him no survivor.
12 Jehu then set out and went toward Samaria. At Beth Eked of the Shepherds, 13 he met some relatives of Ahaziah king of Judah and asked, “Who are you?”
They said, “We are relatives of Ahaziah, and we have come down to greet the families of the king and of the queen mother.”