"The man brought me back to the entrance to the temple, and I saw water coming out from under the threshold of the temple toward the east (for the temple faced east).

The water was coming down from under the south side of the temple, south of the altar. He then brought me out through the north gate and led me around the outside to the outer gate facing east, and the water was trickling from the south side.

He said to me, ‘This water flows toward the eastern region and goes down into the Arabah (Jordan Valley), where it enters the Dead Sea. When it empties into the sea, the salty water there becomes fresh. Swarms of living creatures will live wherever the river flows. There will be large numbers of fish, because this water flows there and makes the salt water fresh; so where the river flows everything will live.’ ”

As the water flowed towards the east the flowing stream became a river that progressively became deeper and deeper as it flowed through the valleys and wadis towards the Dead Sea.

Four times Ezekiel is told to measure the distance of 1,700 feet, which is about a third of a mile (or, 1,000 cubits). Ezekiel finds the river getting deeper and deeper at each of the four points going from ankle-deep to knee-deep to waist deep until it was over Ezekiel’s head and impossible to wade across.

Further investigation by Ezekiel reveals that one of the main features of this spring of water was that it formed a life giving river. Ezekiel notices a large number of trees flourishing on both sides of the river and that the Dead Sea (or, Salt Sea) became fresh with a large number of fish and swarms of living creatures living in what was now the Living Sea!

Ezekiel is told in summary, “Where the river flows everything will live.” 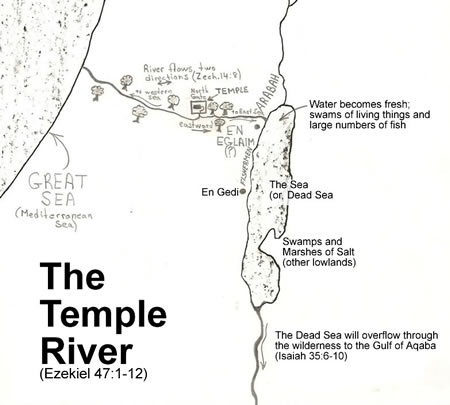 (Note of interest: A letter from 100 BC called the Letter of Aristias refers to a spring of water on the temple mount that naturally exists inside the temple courts. See details 1, 2.)

The road (mentioned in Judges 21:19) in the Hill country of Benjamin that goes from Lebonah, straight ahead in the photo, to Shiloh, to the right off the photo.

Details of the cities and lands represented in Jerusalem on the Day of Pentecost in 30 AD according to Acts 2:5-12.

"Never let success hide its emptiness from you.” – Dag Hammarskjold

The seven signs recorded by John and the seven lessons Jesus intended to communicate with them:

Part One: The Lachish Letters (or, Lachish Ostraca) are a collection of eighteen Hebrew correspondence written on potsherds from the days of Jeremiah during Nebuchadnezzar’s invasion of the land. The letters were found in the 587 BC destruction level and are clearly records of communication of Judah’s military in its final stand against Babylon written most likely in 589-588 BC.

The city of Lachish was under attack in Jeremiah 34:6-7: “Then Jeremiah the prophet told all this to Zedekiah king of Judah, in Jerusalem, while the army of the king of Babylon was fighting against Jerusalem and the other cities of Judah that were still holding out – Lachish and Azekah. These were the only fortified cities left in Judah.”  Letter IV says, “…for the fire-signals of Lachish we are watching, according to all the signs which my lord has given, for we cannot see Azekah.” (Details 1, 2, 3. Photo. Map.)

"As iron sharpens iron, so one man sharpens another."
- Proverbs 27:17