"This is what the Sovereign Lord says:


'These are the boundaries of the land that you will divide among the twelve tribes of Israel as their inheritance, with two portions for Joseph. You are to divide it equally among them. Because I swore with uplifted hand to give it to your ancestors, this land will become your inheritance.'

Ezekiel's Division of the Land for the Restored People of Israel

Beginning in chapter 40 Ezekiel began announcing promises to Israel that included hope of restoration and a description of their new temple that will again host the Glory of the Lord. Now, as Ezekiel finishes his prophecy the Lord identifies for the restored people of Israel the new divisions of the land of Israel for the twelve tribes plus the Levitical portion of the land which include the sacred district that contains Jerusalem. The division of the land in Ezekiel is similar to Joshua’s division of the land with one major exception: this time the portions will be equal.

Also worth noting is the fact that foreigners (aliens) who had converted to the religion of the Jews to worship Yahweh and were living in obedience to the covenant could reside among the natural tribes of Israel in the land.

Here is a photo of a diagram I have drawn in my Bible (click on the image for a larger view): 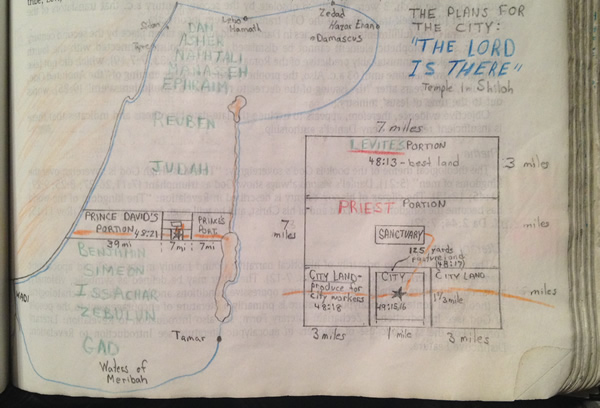 Demut (Hb) - likeness (Eng) - The Hebrew word demut means “likeness,” “shape,” “figure,” “form,” and “pattern.”
In 2 Kings 16:10 demut means an exact pattern to use in order to produce actual things.
In Genesis 1:26 demut refers to the original that is to be duplicated.
In Ezekiel 1:10 demut is the shape or design that is copied.

I will live productively and responsibility today, but I will maintain hope in a future eternity with the Lord.

A wadi in the Negev.

A map of the International Highways from the Old and New Testament and the local roads including the Beth Horon Pass that led travelers from the Coastal Plain and the plain of Aijalon up through the Judean hills to Jerusalem.

“Believers cannot think like this age and still produce the fruit of the Spirit. The formula does not work that way.”  - Galyn Wiemers

Job 38:16 mentions the springs of water in the floor of the ocean that feed the seas. These springs were discovered in the second half of the twentieth century. Until then it was assumed the oceans were filled by rain and being fed by all the rivers of the world.

Part Two: (The Lachish Letters (or, Lachish Ostraca) are a collection of eighteen Hebrew correspondence written on potsherds from the days of Jeremiah during Nebuchadnezzar’s invasion of the land. The letters were found in the 587 BC destruction level and are clearly records of communication of Judah’s military in its final stand against Babylon written most likely in 589-588 BC.)

In Jeremiah 38:4 the critics of Jeremiah claim Jeremiah should be put to death. In the literal Hebrew text the reason they use to justify their demand to execute Jeremiah is: “let be put to death this man for he is weakening the hands of the soldiers who are left in this city and the hands of all the people by speaking to them such words for this man is not seeking the welfare of this people but their harm.” In Letter VI of the Lachish Letters an army officer uses the same Hebrew expression “weaken the hands” to complain about the wording in a letter the royal officials of Judah had sent out to their troops facing Nebuchadnezzar. The royal letters were filled with over-optimistic encouragement and propaganda. (Details 1, 2. Photos.)

"Like a roaring lion or a charging bear is a wicked man ruling over a helpless people."
- Proverbs 28:15