"The word came to Jeremiah from the Lord when King Zedekiah sent to him Pashhur son of Malkijah and the priest Zephaniah son of Maaseiah. They said:

'Inquire now of the Lord for us because Nebuchadnezzar king of Babylon is attacking us. Perhaps the Lord will perform wonders for us as in times past so that he will withdraw from us.'

But Jeremiah answered them, 'Tell Zedekiah, This is what the Lord, the God of Israel, says:
I am about to turn against you the weapons of war that are in your hands, which you are using to fight the king of Babylon and the Babylonians who are outside the wall besieging you. And I will gather them inside this city. I myself will fight against you with an outstretched hand and a mighty arm in furious anger and in great wrath.' "

Tempting God by Rejecting His Word, but Seeking a Miracle 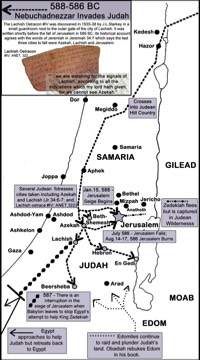 In 588 the Babylonians had returned to enforce a blockade and begin their final siege of Jerusalem (2 Kings 25). In these desperate times King Zedekiah sends a royal advisor Pashhur and a priest Zephaniah to ask Jeremiah to seek the Lord and request a miraculous deliverance similar to the days of Hezekiah when the Lord delivered Jerusalem from the hands of Sennacherib and his Assyrian forces (2 Kings 19:1-35).

In a few months this royal advisor Pashhur (not the priest that was renamed Terror-on-every-side in ch. 20) will side with Gedaliah and Jehucal (whose bulla signatures have been found) in Jeremiah 38:1-6 to demand King Zedekiah kill Jeremiah for his negative words.

This priest Zephaniah is referred to in Jeremiah 29:25-26. The priest Zephaniah was accused of not properly disciplining Jeremiah when Jeremiah sent letters to the captives already taken to Babylon and for prophesying that Zephaniah would be promoted as the overseer of the Temple to replace another priest. Zephaniah the priest was sent to Jeremiah by King Zedekiah again in 37:1-3.

Zedekiah will call on Jeremiah several times (here, 37:3-10; 37:17-21; 38:14-18) and Jeremiah’s answer was consistent: Judah will be defeated and the only hope for the king and his people was to surrender to Nebuchadnezzar.
It is worth noting that the Lord had determined at the beginning of Jeremiah’s ministry in 627 BC to overrun Judah with the forces of Babylon (Jer. 1- 3). It was vain of Zedekiah to ask for a miraculous deliverance when he had already been told repeatedly Jerusalem would fall and the only hope of survival was to surrender. Zedekiah, his royal officials and the priesthood were using God’s name in vain and acting presumptuously by asking God for a miracle. Zedekiah’s behavior was not an act of faith, but was behavior that tested God. Faith would have trusted the Word of the Lord and acted in obedience. Faith will trust and obey. Praying to demand miracles is not faith, but the sin of using God’s name in vain.

I will listen and obey the Word of the Lord instead of seeking to have the Lord meet my requests.

For favor with people

“If pastors do not teach and people do not know, then the question must be asked, ‘What is it that the pastors want their people to apply in their lives?’ ”  - Galyn Wiemers

By 1523 Ulrich Zwingli in Switzerland had noticed in his study of Scripture how far the Roman Church had corrupted itself. Zwingli continued to preach in his local church and the public and civil government of Zurich, Switzerland followed him in his rebellion. Zwingli faced opposition from those (the Anabaptists) in Switzerland who wanted to take the rebellion (or, the Reformation) further. Eventually, the Catholic Church went to war with Zwingli’s followers and Zwingli was killed in battle. The Catholic warriors hacked his body into pieces as a sign of disrespect for the rebel Ulrich Zwingli.

"The Lord does not let the righteous go hungry but he thwarts the craving of the wicked."
- Proverbs 10:3